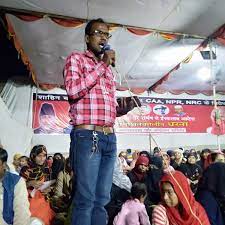 HRDA has issued an urgent appeal to the National Human Rights Commission of India on August 28, 2020 regarding the misuse of law by Gujarat Police to harass Mr. Kaleem Siddiqui for participating in peaceful citizen’s movements. Mr. Siddiqui is a human rights defender and a journalist.

A show-cause notice was sent to Mr. Siddiqui on July 17, 2020, from Mr. M A Patel, Assistant Commissioner of Police (A division), Ahmedabad Police, asking him to explain why the police department should not extern him for two years from Ahmedabad and the neighboring districts of Gandhinagar, Mehsana and Kheda. This notice said 10 anonymous complaints and two FIRs were registered against him in 2018 and 2019, but did not provide any details such as date of complaints, complaint numbers and police stations where they were registered. It alleged that he possessed dangerous weapons and was involved in anti-social activities.

The first FIR against Mr. Siddiqui (CR No. 1-141 of 2018) filed by Mr Naushad at the Ramol police station under Sections 143, 144, 148, 427 and 294 (b) of the Indian Penal Code, pertain to unlawful assembly, rioting armed with a deadly weapon, causing loss and damage etc. Mr. Siddiqui was acquitted in this case by the Additional Chief Metropolitan Magistrate, Ahmedabad on January 24, 2020, and no one has appealed the decision in the sessions court since.

The second FIR alleged he was part of anti-CAA (Citizenship Amendment Act) protests organised at Rakhial inside a private property. On July 30, 2020, Mr. Siddiqui provided a written explanation to the show cause notice, where he denied all the charges and submitted that allegations against him were yet to be proved by the prosecution and as such an FIR could not be used as a reason to issue such a notice.