Brutal lathi-charge and illegal detention of HRDs in Odisha 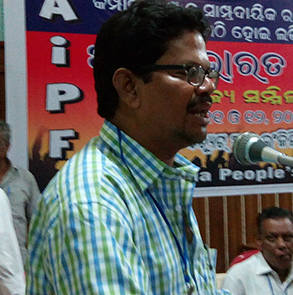 HRDA has issued an urgent appeal to the National Human Rights Commission of India on January 14, 2022 regarding the brutal police action including an illegal lathi-charge on environmental HRDs in Dhinkia village at the site of JSW Utkal’s upcoming steel complex, and arrest of activists by Odisha Police.

On January 14, 2022, Mr. Debendra Swain, Mr. Muralidhar Sahoo and other villagers of Dhinkia village organised a peaceful rally demanding a halt to demolition of betel vines and removal of police pickets from around the village. When the rally was passing through the village road, policemen launched an indiscriminate assault on protestors without providing any warning. Several HRDs, including women, elderly HRDs and children were seriously injured in the indiscriminate lathi charge and received treatment in the village. Police detained Mr. Narendra Mohanty, Mr. Debendra Swain, Mr. Muralidhar Sahoo and other HRDs from the spot in an arbitrary and illegal manner.

Mr. Narendra Mohanty, Mr. Debendra Swain, Mr. Muralidhar Sahoo and others were assaulted and arrested in reprisal for their activism in support of the villagers of Dhikinia. These actions on the part of police officials amount to a gross abuse of their powers. The brutal crackdown on protestors without following any standard operating procedures in the management of assemblies is a grave violation of fundamental right to assemble and protest. The fundamental right to life and personal liberty and freedom to assembly and protest are granted by Articles 21 and 19 of the Indian Constitution.