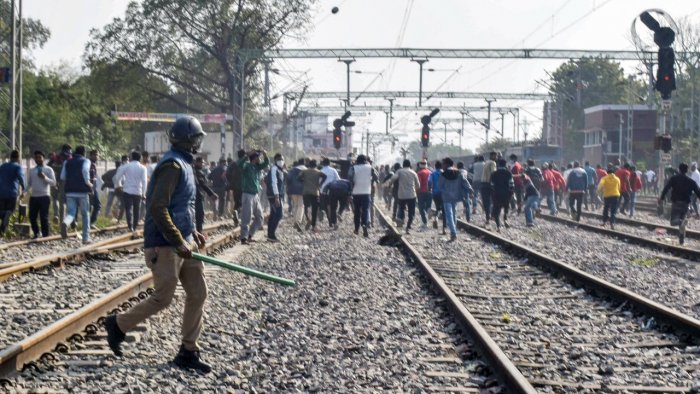 Students and aspirants for Railway Recruitment Board examination

HRDA has issued an urgent appeal to the National Human Rights Commission of India on 04th February 2022 regarding brutal lathi-charge and illegal detention of students and aspirants for Railway Recruitment Board examination.

On January 25, 2022, a students’ meeting was called at the Prayagraj railway junction where aspirants in large numbers assembled and then moved to the railway tracks. The protesting students later sat on a dharna before the Kanpur Intercity train and started raising slogans. Forces of many police stations along with the Government Railway Police (GRP) and Railway Protection Force (RPF) reached the spot.  The forces immediately commenced a lathi charge on protesting students.

The police started a search operation in the areas living near Salori, Chhota Baghada, Annibesant police posts. To find the protestors, the policemen entered the students' lodge and broke their rooms’ doors. Videos about police assault of students became viral on social media. Around 90 students were arrested in the police action; 200 students were injured, with 30 seriously injured. The police registered an FIR against 6 named and 1000 unknown people and arrested two people. Six policemen were later suspended for using unnecessary force during the incident.

The brutal assault on students was a completely arbitrary and an illegal action by the police and is a serious violation of constitutionally guaranteed personal liberty by the Constitution and Indian laws. Article 19 (1) (b) of the Constitution guarantees the right to peacefully assemble and Article 21 of the Constitution ensures to all its citizen right to life – a life to live without fear, intimidation, harassment or mental torture. The actions of the UP police violate the DK Basu guidelines of arrest, Indian penal code and the India Constitution.